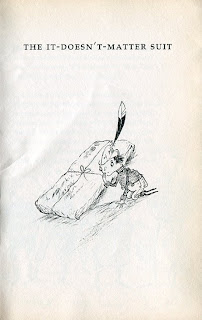 THE THING ABOUT POSTHUMOUS WORKS is that it can be difficult to asses a "newly discovered" story in the appropriate context in a writer's career. A little over two weeks ago, I wrote about Sylvia Plath's "first" children's book, The Bed Book, which was written in 1959 but published in 1976. It was twenty years before Plath's second children's book, The It-Doesn't-Matter Suit was released in 1996, but that book was also written in 1959 in the few months that constitute Plath's "career" as a children's writer.

At that time, Plath did not yet have children of her own, although becoming a mother was very much on her mind. Her husband Ted Hughes had taken to writing for children on their honeymoon in 1956, and had started to publish children's stories in periodicals in 1958, which is what inspired Plath to try her hand at children's work as well. But while Plath tried to publish The Bed Book in her lifetime, her other stories were mostly tucked away.

It was not until a German publisher delved into Plath's papers at the Lilly Library at Indiana University in the hopes of putting together a new short story collection that The It-Doesn't-Matter Suit came to light. Plath's sister-in-law Olwyn Hughes brought the book to Plath's publisher Faber who immediately announced that they would bring it out as a book illustrated by Rotraut Susanne Berner.

THE IT-DOESN'T-MATTER SUIT TELLS THE STORY of seven year old Max Nix, the youngest of seven brothers, and his deepest wish: to own his own suit. 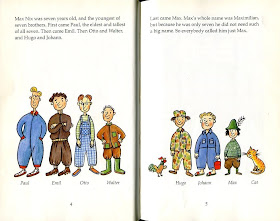 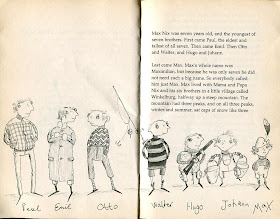 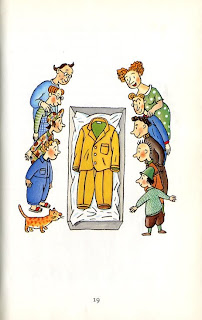 As the youngest of seven, however, Max is last in line for everything, and it doesn't look like his chances of acquiring a suit are all that good. Then one day, the postman delivers a box whose label has gotten wet, so that the only name legible was Nix. No one knows who the box is for, nor can they imagine what it contains. When at last it is opened, "there in the grey box with a wreath of white tissue paper around it lay a wooly whiskery brand-new mustard-yellow suit with three brass buttons." 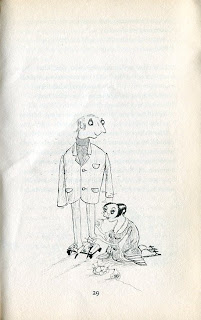 As per usual, Papa Nix gets first dibs. He is very excited, determined to wear the suit the next day to his job at the bank. "He thought how it would be to wear the woolly, whiskery, brand-new, mustard-yellow suit to work. Such a suit had never been seen before in all Winkleburg." However, as he thinks more about it, he decides it might not be professional to wear such a bright suit, and announces, "'I am too big to wear a mustard-yellow suit.'" 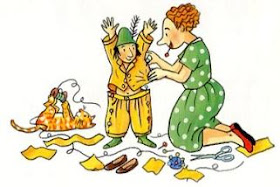 So it passes on to Paul. Mama Nix has to make some alterations, but "when she was through, the suit fitted Paul to a T. He decides to wear it the next day for skiing. "Such a suit had never been seen before in all Winkleburg." But none of his friends where a suit like that, and he decides, "I am too big to wear a mustard-yellow suit.

So it passes on to Emil who is going to sled in it, but thinks of his friends, and decides he is "too big to wear a mustard-yellow suit," as does Otto, and then Walter, and Hugo, and finally Johann. And so, at last, it passes to Max.

Max wears the suit the next day, and he doesn't care that no one in Winkleburg has ever seen a suit like it: IT DIDN'T MATTER. He goes on to wear the suit while doing a lot of the things his brother's felt they couldn't do in the suit: skiing, riding his bike in the rain, ice-fishing, sledding, fox-hunting. And as for the potential difficulties wearing the suit in those situations could create: IT DIDN'T MATTER. 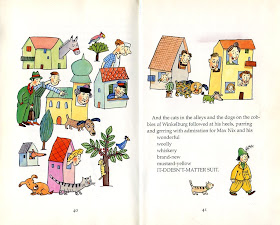 OUTSIDE OF THE UNBELIEVABLE PREMISE, that a seven year old boy would want a suit more than anything in the world, The It-Doesn't-Matter Suit is a delightful book. It contains many repetitious refrains, like "Such a suit had never been seen before in all Winkleburg, and "I am too big to wear a mustard-yellow suit," which I'm sure young children would enjoy.

The book is included in 2001's Collected Children's Stories with illustrations by David Roberts, the black and white illustrations in this post.

The little background material I found came from a 2005 Horn Book article by Lissa Paul, a 1995 article from the Daily Mail (London), and a 1995 announcement in The New York Times.

All images are copyrighted © and owned by their respective holders.